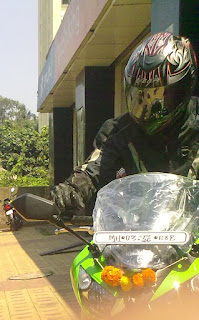 They always said that life changes in India after you bring home a superbike. Ninja 650R is not really a superbike but by Indian standards of commuter biking, it definitely is one.

Its been just two days that the bike has come home. Registration formalities are underway and I am already feeling the "Living with Ninja Experiences".

People started approaching right at the showroom door and started asking price. Dad was zapped after knowing it. He couldnt believe that it costs that much. and then "You could buy a big car in that money!". The sweeper in the next building came running and insisted that I tell him the price.

One shop owner offerred me to park it inside his compound instead of parking on the road, without asking. Never happened in past when I parked P180 or P220F in front of this shop.

One guy on road, honked and gave thumbs up, then proceeded to tail for a while.

Met a guy at RTO, very excited to see "Ninja ZX 650". kept talking in english though I answered in hindi. He showed the "air cooler" to his partner, and then proceeded to tell him, "mere ko car me jyada knowledge nahi hai, lekin bike ka sab pata hai" (I dont know much in cars but I know everything in bikes)

One fellow asked if he can sit and take a pic (I really appreciate these manners, as long as I can politely say No :) ). He took a pic and told me, "It would go on facebook now and your bike will be famous"

Two typical questions that deserve a placard to be put on bike with answers
- "Kitane ki hai?" (How much does it cost)
- "Kitana deti hai?" (How many kilometers a litre)

And thanks to the Daytime Running Light, people go crazy, drop their work and stand in middle of the road to tell that I am running with the lights on. This is accompanied with palm gesture similar to screwing a bulb in-out of its socket. I usually have my lights on so this is less of an annoyance now :)

Havent gone out since registaration is not completed, hopefully that happens next week. Till then it would stay parked :( More after that... :)