Finally the HID is on! (For the impatient souls, scroll down fast :) )

Ever since I started digging through various forums and groups, one magical acronym always sounded desirable - HID. There was enough information to read about it and posts flooded with questions, opinions and experience that caused an overload :)

With VT-KIRAN nearing 4 years of existance, and daily commute nearing 70kms, most of it on dark highway, it was tempting to get HIDd. I had done the avenger coil mod but it still didnt seem sufficient. HID kept tempting.
When I finally decided to get HIDd, I got my hands on two projector assemblies salvaged from from P220F and a pair of Raylux 4300K HID. The excitement of getting slim ballast shortlived when I could not get this going!
You could buy these projectors at Kurla bazar for a few hundred bucks. It was crude to get those mounted on top of P180. And then, no mechanic around me was sure how to wire the stuff. In desparation, I wired it directly to the battery on Mahabaleshwar ride, just to discover that the projector was mounted incorrectly and the beam pointed to sky :( So the projector was left on during the entire trip and served well to attract folks around who could not get what that protruding thing was :) In second attempt, I used a relay and switch to swap it with stock low beam. It failed miserably too and then I suspended the project. VT-KIRAN soon left me and gave way to VT-RAPTOR.

I thought adding HID to P220F would be simpler but many ensured that its not as easy as it seems. I was told that opening up P220F fairing is a daunting task and should not be undertaken. I wondered how would it happen if stock bulbs fail? Someone pointed out that P220F has a mechanism to detect failed low beam bulb based on lower current draw and then it would switch over to high beam (HIDs draw less operating current than stock P220F bulbs).

Many thanks go to the low beam bulb that died. On a fine evening I started and noticed that the high beam stays on. Next day at service center, it was a matter of minutes to get that replaced. Looking at it, I decided to get my hands dirty again and be glad about it.

What would you need
Steps to plug it in
The whole setup should not take more than 30-60 minutes.

I am yet to figure out how to replace high beam bulb but as of now this looks sufficient. Road illumination is improved for sure and I am finally HIDd :D 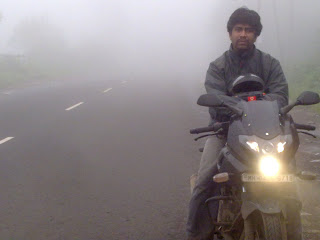