My neighbor came to me a day and said, "hey look, I got this old PC laying around and there is some data on it. Can you recover it? The hard disks is crashed. There are some old pics on it which I would like to have back."

So he sent it over. I opened the cabinet and took out the disk - Western Digital Caviar 40GB ATA. Quickly connected it to laptop using USB IDE adapter and waited for the disk to be detected.

A minute went by and no sign. I checked power and disk had not spun up. Looked like it was real dead all this time and sleeping peacefully in the ATX coffin :)

However, detailed look at the disk revealed this ... 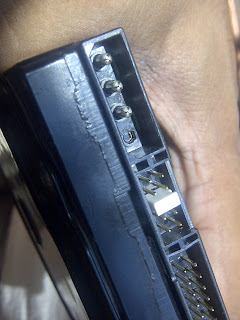 "Ohh well, lets try to revive it", I said to myself and shoved some aluminum foil in the molex connector, hoping that it would make contact. It didnt work. 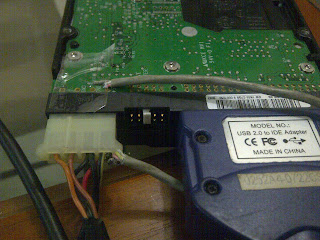 Cut a small wire, put in molex and taped it over exposed 5V contact on PCB. Voila! disk spun up and Windows found it in seconds. Resurrection!!! 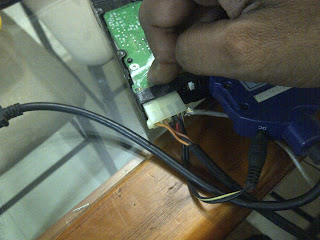 One problem though, tape wont hold the wire over PCB and disk spun down :( I could press it down and it would stay on but remove the finger and it powered down again. Soldering was other option but I hate to solder these wave soldered contacts.

Solution: keep a laptop power adapter on the contact to keep it pressed :)
It worked. The disk appeared to be very fine and I could retrieve entire data off it without problem :) 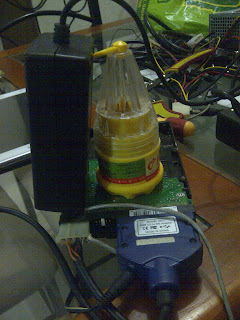