A non-political post after long time. I rode up with BNers on the weekend to Hedvi beach on West Maharashtra coastline.

The trip was being planned for some time but I had not confirmed participation, even though I was on two week annual vacation for the weekend. Weekends are usually most unpredictable for me and any planned commitment on weekend usually ends up getting canceled.

On friday night, I decided to join in the ride and hit bed. Got up at 4 and had bath praying that I am not greeted by a tyre puncture when I get the bike off its stand. Puncture and breakdowns have become quiet frequent now and it was just a day ago I have got block piston oil leakage "fixed" at service station.

Came in the parking lot at 4.45 and all seems well, no puncture or anything else. I was off for another ride! Yay!!

Vashi station was meeting point and I was there in 30 mins. Thankfully I was not the last man to join :) Unfortunately Amit lost his bag on the way and he noticed it when he stopped at an ATM. He had tied it on pillion seat with bungee cords. "How can you not notice your bag hit ground?", "Bahaane de raha hai"...etc were the comments we passed. Amit reached in some time and we got our answers...his bull had a good thump that would make all other noises silent :D

He lost his cloths with the bag but we all decided to roll. We were total 8 and 3 more were going to join us at the destination. Ranaditya and I took the initial lead and we quickly zipped on palm beach road till we came to Uran diversion.

As we waited at signal at 5.45am and watch all container trucks pass by without looking at the signals, we two realized that no other guy had arrived. We were puzzled as it was a mere 5-6kms stretch that we had crossed so far. Few calls and we were told that a new joiner had managed to take wrong route. They joined us few minutes later. 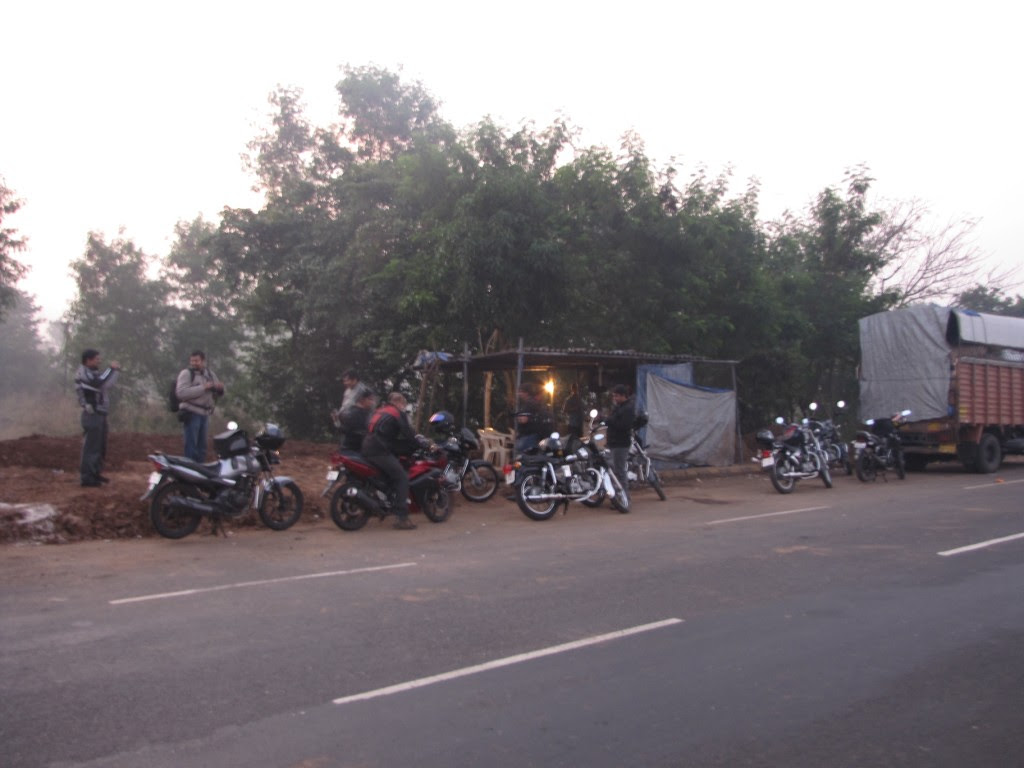 We all started and came onto NH-17 via Vashi-Palm beach road-JNPT road-panvel bypass. NH-17 was great to ride with the mist. We stopped over for tea/breakfast and rolled again.

Rana me and Pratik kept zipping ahead and three bullets kept following. After a while Pratik also was not seen in the mirror. On a good curve, Rana stopped and got ready with his camera. He was expecting other to ride in and shoot. Few minutes, but no one came in so we moved ahead again. Few kilometers before Mahad we stopped again. Got a call and we got the news that Amit had hit ground with his bullet near Mangao. It was 10-15 kms behind so we rode back there. Amit was taken to hospital by now. His hands took the impact while he hit and he had suffered from minor injuries. He was well armored and hence was lucky to avoid many things which could have been dangerous. Tempo was arranged to haul his bike back home and two other bulleteers decided to accompany him. Our count was reduced to 5 and after a big break, we started again. 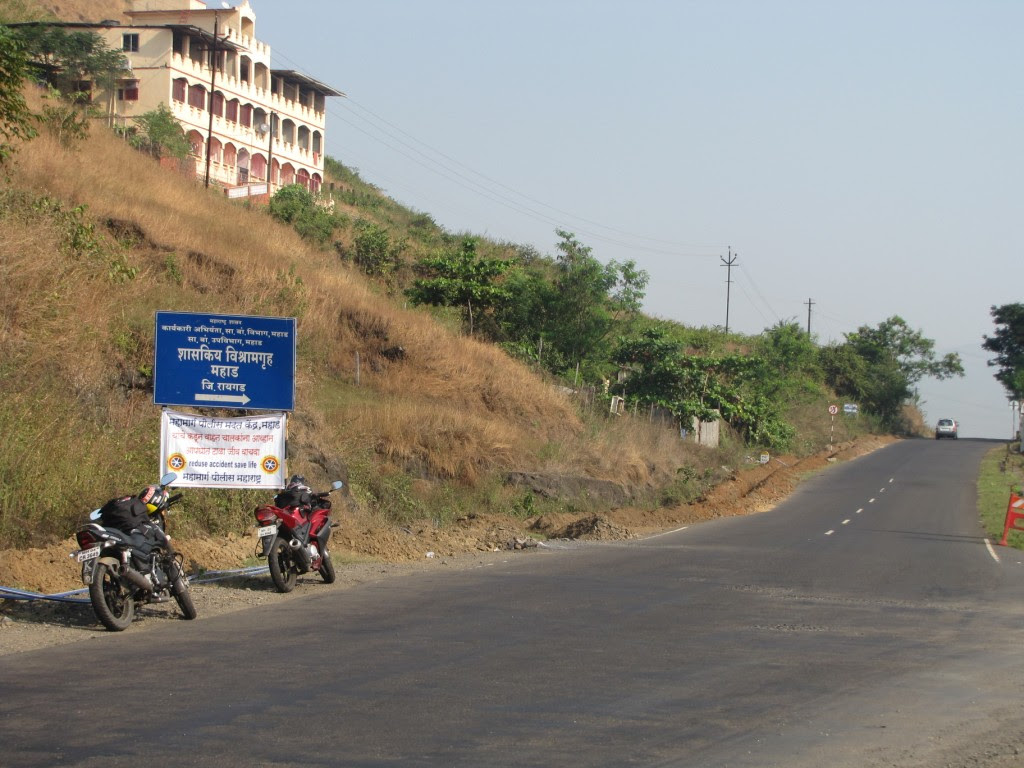 Rest cruise was amazing. after around 40kms, we reached Kashedi Ghat. This ghat was one of the dream track I always wanted to ride on. It has smooth tar, steep ascend and maddening curves. I am not an expert rider but leaning on the Kashedi curves was a great feeling. I leaned bike on the curves more than anytime before and scraped the rear tyre on entire treads. Khed follwed after this and we passed Bhoste Ghat and Parshuram ghat to reach Chiplun. On the top of this ghat, a patchy turn made me steer away from road. I was quick to keep the bike upright and pass over bumpy gravel without kissing the dust. One cop standing there pointed at us and cursed but luckily didnt stop us. Saved us from a grilling session and chai-paani kharcha ;)

It was noon and we had to take Guhagar diversion Chiplun. We had our lunch at Abhishek hotel and loved the food. Must go if you like Maharashtrian non-veg. The hotel is tiny and inside a lane. And its wall is pinned by celebrity photos who have visited them before.

Now we moved away from NH-17 and went towards Guhagar coast. This road is again very nice and curvy and leaning was fun again. My tyre has lost its threads in center and needs replacement. Treads on border were still intact since we hardly get to curve on day-to-day rides. The MRF held the road quiet well.

We met the other three guys just before Hedvi. The count was 8 again and we reached Hedvi soon. The place we got was clean. We had booked dormitory for all of us. We grabbed kande-pohe and tea and relaxed for a while. There was no mobile network but we were told that on beach you can catch signal. 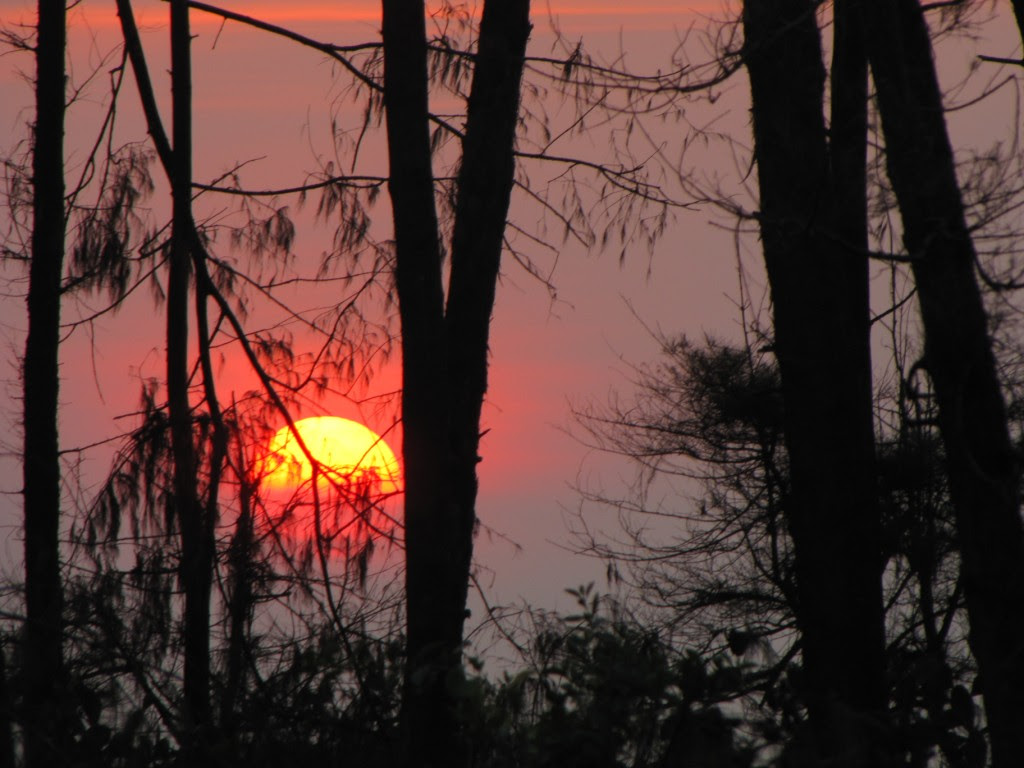 While sipping tea, Chaitanya spotted that it Sunset was pretty close and we quickly ran to catch some snaps. I took some snaps and preferred to explore the beach. The beach is pretty small and deserted. Its very clean though. A small river enters the sea in one corner. Other end has the temple and rocky shore. There are lots of trees at the beach and most were damaged by the recent cyclone. 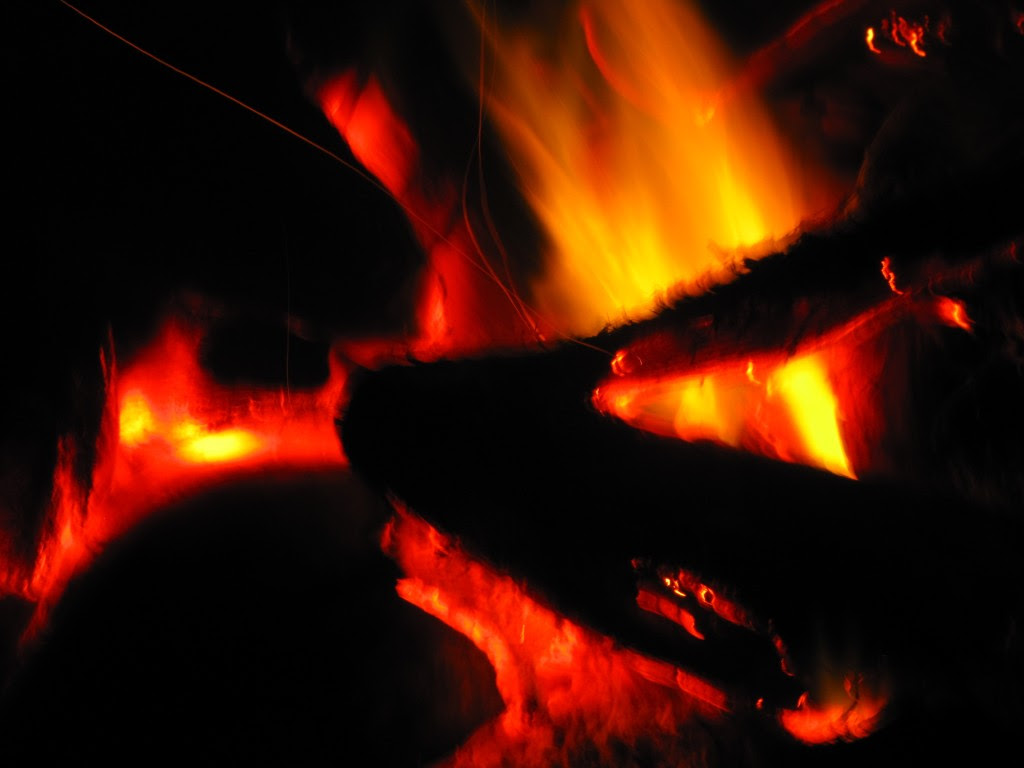 Just before Dinner, Vinod gave us good insight about his job and provided enlightenment on few related things. We sat by the fire (perfectly BLOWED and lit by Pratik) and starter snacks - good mixture of salad, papad and wafers, complimented by dry chicken and Bhajiya, garnished by jokes! Dinner was served by 10. Food was ok but the jokes were better :) 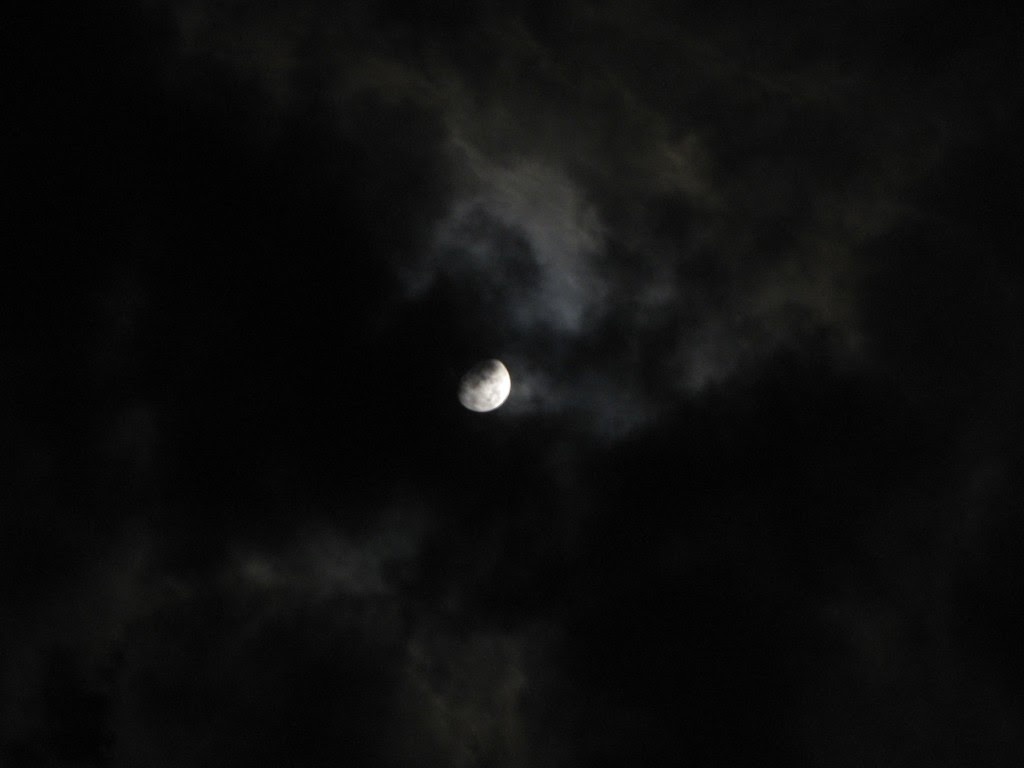 Few of us, including me, decided to walk up to beach in moonlight. We laid back on flat rocks and watched the moon play hide-n-seek behind clouds.  I needed sleep so returned to dorm.

By 3am I woke up. A new family had arrived in next room. The ladies and kids were chattering loud enough. And here, Chaitanya was entertaining everyone with nice stereophonic snore. Managed to sleep again quickly.

In the morning, we went by river and tried to catch glimpse of a nice sunrise. Breakfast was not ready so we decided to start return ride. The three musketeers started journey before us and we visited Velneshwar beach which is very close to Hedvi. For the spirituals, you can visit two famous temples on these beaches. Velneshwar is larger beach and more eating/lodging options are available here.

Just before reaching Velneshwar, Chaitnya didn't notice Pratik stopping and hit him from behind. It was at a very low speed. Rana and Pratik had stopped someone for directions and Chaitnya's attention somehow wandered away. Both fell and Chaitnya got a small bruise and bent handle. 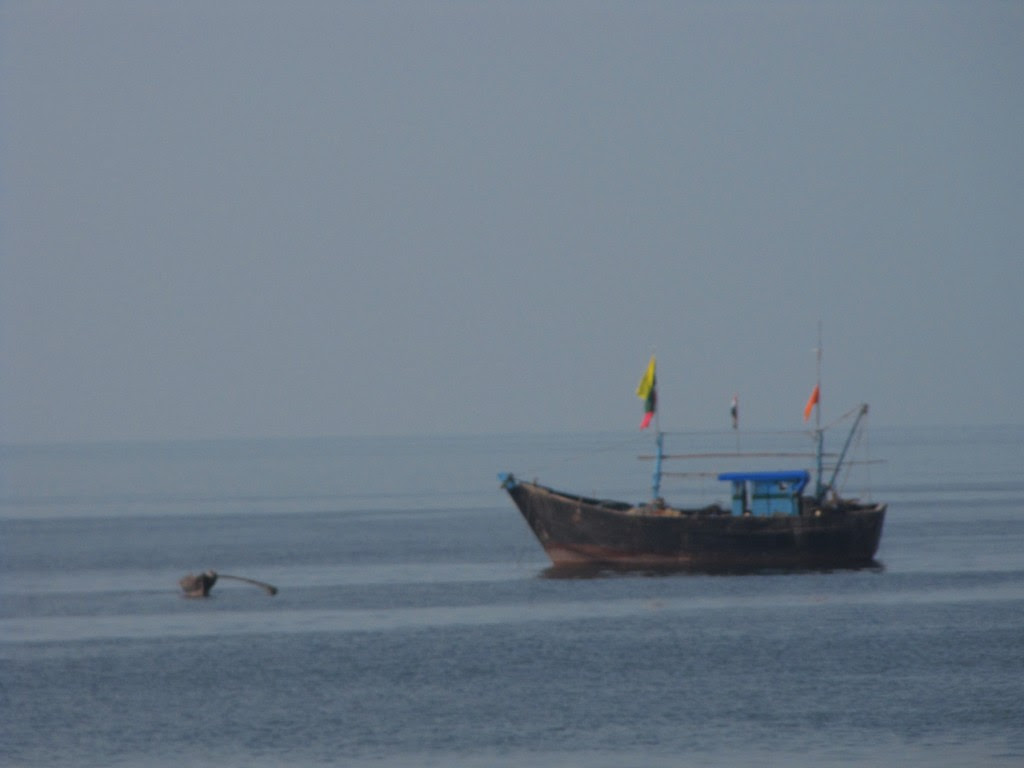 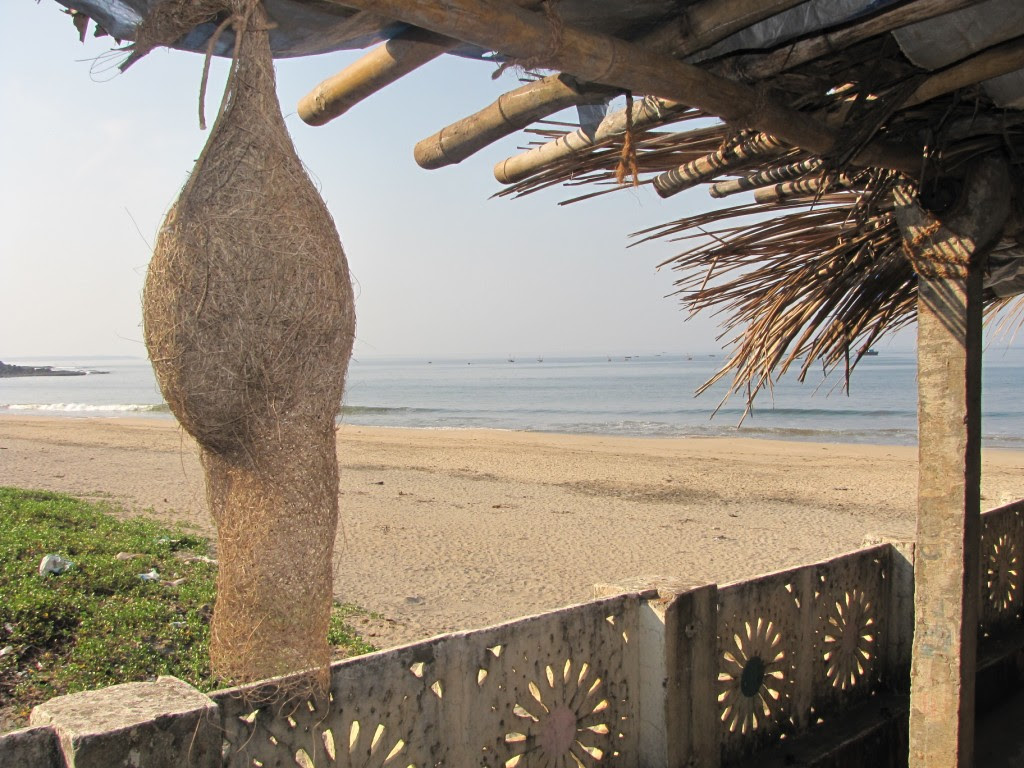 From Velneshwar, we started riding for Mumbai. I was very low on oil so got it on the way and topped up. Few kilometers before Chiplun, there is a diversion that can help bypass busy city streets and connect directly to Parshuram Ghat. Chaitanya separated here and he moved towards Pune. Now we were 4 remaining - Rana and Pratik leading. Bhavesh and I decided to trail.

Kashedi ghat was deserted now. Tyre and tar was hot and it was another excellent leaning hour. It was an unforgettable part of ride. Just cant describe it in words.

Remaining ride was incident free, we just kept riding. Ate at Kamath's near Mahad and stopped over for tea before Panvel. Must thank Bhavesh for being perennial source of water along the way. We took few breaks along the way and I kept topping up engine with 710 (oil). We met Sanket and Amit along the way but kept riding as they had some other plans.

Work calls started coming in as we reached Panvel and it signified a good trip coming to and end sooner :) We separated at Kalamboli. Rana and Bhavesh continued via Uran road, Pratik took left for Kharghar and I continued via Shil phata. Mumbra bypass is heavily damaged and provided an off-roading patch before entering Thane.

Bike supported well despite the half bald tyre and oil seepage. Thanks baby. I love you more ride by ride :*