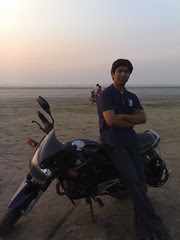 My first steed left me today!

Almost exactly 4 years ago, I had bought this Pulsar 180cc Fear The Black edition by paying INR65000 upfront. It was an exciting time, it was completely unexpected phase of life.

I used to ride my brother's HH Passion. It used to pant when needle hit 90kmph. Once I rode my cousin's P150 on Cadbury flyover and I was excited to see a P150 needle touching 100 mark effortlesslessly. If I will buy anything, it would be Pulsar, this was the verdict. The dream had come true finally in March 2006 when I booked my Pulsar 180.

Last 4 years have seen many changes in life, new places, new people, opportunities and what not. It had hardly done 2 months with me and we met with first accident - two guys on speeding yamaha hit directly on the front wheel. They left me with misaligned fork and leaking disk brake. But managed to get it sorted out with insurance, before I headed to Pune for HSBC job. Nothing major after that.

Mods? I tried many. Trying to get a HID was last but half attempt. But had successfully upgraded its coil to avenger's, added a temperature guage (taken from Layland truck), enflied ammeter and the unique one was the turn indicators. I had got Zen's side indicators and drilled them into fairing. With this I never had to worry about stock indicators getting broken. Perhaps I am the only one to do it so far :)

I did its run-in quiet religiously for first 1000kms. First full throttle was done on Diva-Airoli bridge and EE highway. The first growl was maddening! But the Dandeli ride did magic to it. That hard rip really opened the engine well and touching 120kmph became routine. I am really glad to do that ride.

I surprisingly didnt ride much in first two years. Most rides were occassional Mumbai-Pune trips on long weekends. Commuting in pune was also less - hardly 10kms a day! But it was fun always.
After coming back to Mumbai, I munched miles like a hog. Daily commute to work added 70kms. In last two years at work in Mumbai, I have never ever went without it, except first two days!

Here is a bit about stickering on it. I had got VT-KIRAN done on its swing arm. It was its name and it is similar to callsigns used by Indian aeroplanes. On the read mudguard, I had a big "K". Just below it was "-.-" which is equivalent to K in morse. And finally there was a circle with LV inside it. It is LV board used in trains, signalling last vehicle in the rake formation :)
It was thrill on curves, Kashedi is my favourite, though it has seen Bhor ghat more than all others. Ride in Pratapgad ghat was great. It felt heaven to scrape pegs and shoes on it. It was more fun on curves but never disappointed on drags either (before the newer engines came in).

No breakdown on any trip except puncture. I really loved that one thing about it, it never stranded me on a desserted road and feel helpless. Punctures always happened within 100mts of a puncture shop and petrol tank always emptied near petrol bunk. I rode it on loose coil for 3 days, including one rainy night at khopoli to collect BN tshirt. It did all Kashedi and Parshuram curves on full bald rear. It ran without front axle spacer from Pune to mahabaleshwar and back, without any injury. But never betrayed me en route. That was amazing.

Talking about punctures, my first one came almost after 1.5 years! and recently it was like one every few weeks. This made me change its rear one to wider tubeless, and voilla! it started with front one :) There were many replacements including crank, clutch plates and shockers but I made it a point to keep it stock and keep it running like it should be. I never got mileage above 35kmpl. More cause I rode above 90 all the time, absoulutely no complaints. Least was I think 20kmpl when I ripped it hard on Kolhapur-Belgaum stretch.

Anyway, it was always a fun to cut through traffic, drag at signals and watch others becoming small spots in the mirror. That adrenaline rush was a kick everytime. 51000kms on odo would be cherished always. One of the best miles of life I can say.

Love you dear. Hope you live happily ever after. Will miss you!